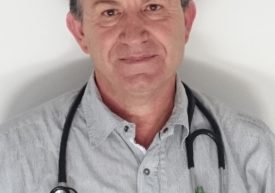 Hampstead Health Family Practice would like to welcome Dr Harb to the team of doctors available of an evening until 11pm.

Dr Hamad Harb has spent the last 22 years working as a doctor in Australia. He has worked in three different states including Western Australia, Queensland and South Australia in various positions including both hospital and general practice. His journey started in Syria where he was born in a village close to the Jordanian borders. He finished high school in the village and then started university in Damascus studying electrical engineering for one year. He decided that Medicine was his calling and applied for a scholarship to study in Russia and was accepted. He spent his first year in Russia studying the language in the city of Rostov on Don. After the first year, he studied his medical degree in the city of Volgograd formally known as Stalingrad and graduated in 1985.

After his graduation from medical school, he went back to Syria to start specialising in Obstetrics and Gynaecology in the city of Damascus. After completing four years of training and exams, including one year of training in Russia, he graduated as a specialist and opened his practice for a short time.

He decided to migrate to Australia (Perth) in 1993 and has been calling Australia home ever since. After spending time learning the English language and getting his qualifications recognised, he registered with the Australian Medical board and started to work as an RMO in Sir Charles Gardner Hospital.

In 2001 he started his training with the Royal Australian College of General Practice in Queensland, Bundaberg, where he lived with his family for four years. He especially enjoyed working at Gin Gin, a small regional town 60 km away from Bundaberg, where he worked as a GP running the thirteen-bed hospital for a year. It was in Queensland where Hamad developed an interest in skin cancer checks, prevention and mole scans.

In 2004 Hamad moved to Adelaide with his wife and children to be close to their family and friends. Dr Harb speaks English, Arabic and Russian.